Kubernetes and other container based deployment systems are great for larger companies, but the cost and complexity can be limiting for smaller teams. Luckily, it's possible to implement robust continuous integration and zero downtime continuous deployments with your existing infrastructure and the help of gitlab & deployer.

Just want to see the code and configuration? The example repo for this post is here.

Gitlab providers completely free CI, even if you don't use Gitlab for git hosting. For the purposes of this post, I'm going to start from scratch with a fresh Laravel installation and guide you through the process of setting up the pipelines which we'll use for testing, building and deploying our code to production.

Head over to gitlab and create a new project. If you are starting a new project, or are happy to move your git hosting to Gitlab, you can use the "Blank Project" option, otherwise select the "CI/CD" option and link it to your Github repository. 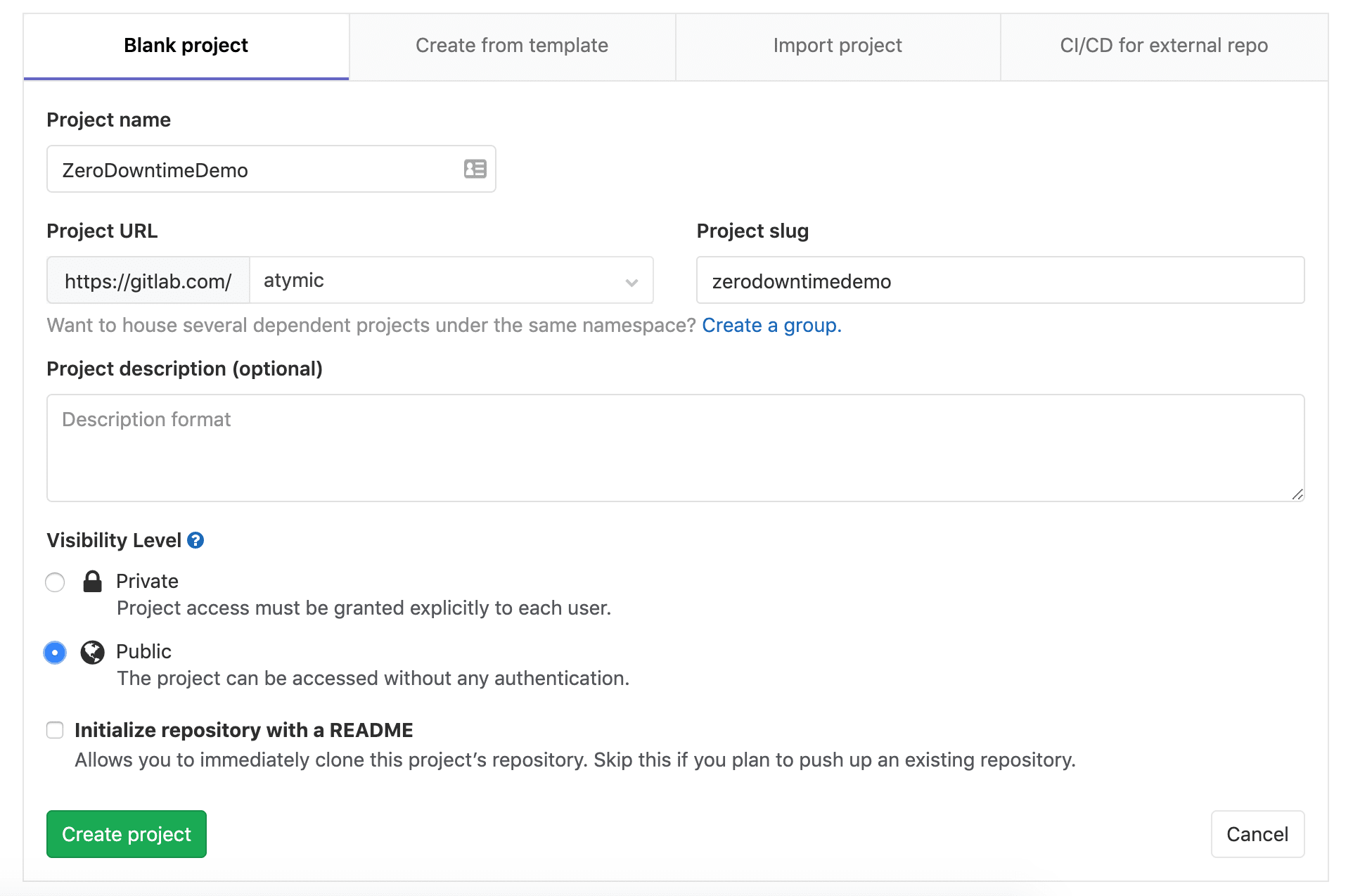 Gitlab CI is configured using a .gitlab-ci.yml placed in the root of your project. Inside this file, you can define your build steps (and what they do), the order they run, caching and many other features. For our application, we'll just use a simple three step build.

Most applications these days will have some sort of automated limiting and (hopefully) tests. Ensuring that the code is valid and works before deploying to production is a good idea, for obvious reasons. If the CI build finds a syntax error or failing test, it won't proceed to deployment.

In our .gitlab-ci.yml configuration file, we'll define a test:php stage. Laravel has some sample tests built in, which we'll run. You could also run limiting and static analysis tools in this stage.

Laravel comes bundled with Mix, which provides an easy interface to webpack to build and compile your front end assets (Javascript and CSS). This step just installs our javascript dependencies & uses mix to build the assets.

It's worth noting here that we are using build artifacts. These are required because we'll be deploying the built assets along with our PHP source code, and each stage of the build operates on a fresh version of the source code.

Now that we've made sure that our code works & have built our assets, we can move on to the actual deployment.

Head over to your project's settings on gitlab, and under CI/CD expand the "Variables" section.

We'll need to add a private key with access to the server so that deployer can SSH in. It's a good idea to generate a new key specifically for deployment, in case it needs to be rotated. You'll want to add it under the variable SSH_PRIVATE_KEY.

You'll also need to add your Laravel .env file as DOT_ENV, so it can be deployed along with the code (you should never store secrets in git).

Since every CI build/deployment starts from a fresh slate, the containers ~/.ssh/known_hosts file won't be populated. To ensure there aren't any MITM attacks, we need to our server's SSH fingerprint as a variable, SSH_KNOWN_HOSTS. 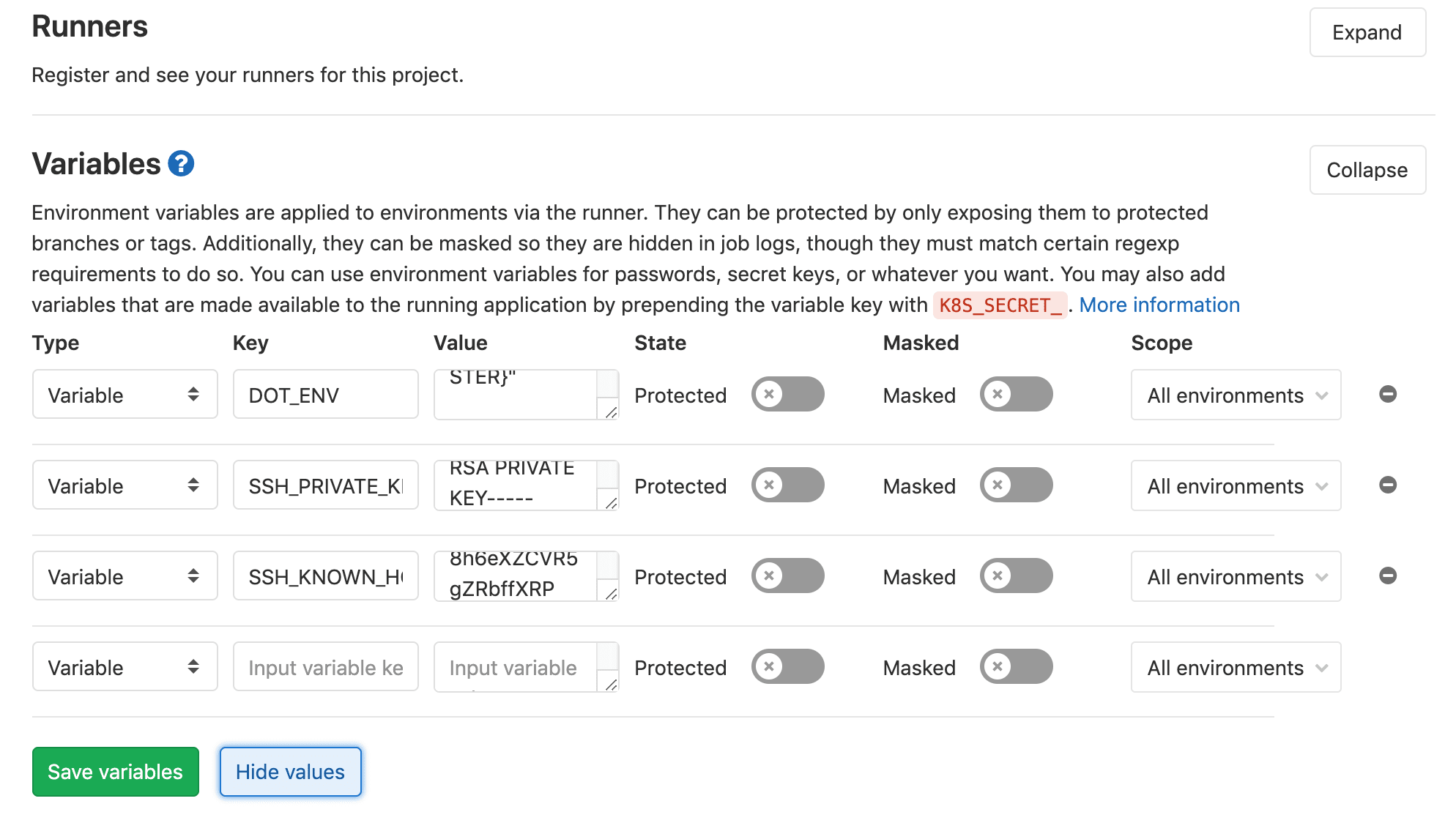 Notice that we have defined the build:js stage as a dependency, which will make Gitlab download and apply the built assets so that they can be deployed to production.

We've also added an only rule, ensuring that only commits to the master branch are deployed. If you don't add this, commits to any branch will be deployed (for example, testing and dev branches).

The stage finally runs dep deploy, which uses deployer to carry out the zero downtime deployment (we'll set it up later on).

Putting it all together

Now that we've got all of our steps configured we'll need to define the order that the stages run in (test, build then deploy) using the stages section (see the example below).

We've also configured a cache for our composer & javascript dependencies to speed up future build (saving us from having to download and install everything again).

Now that we've got the CI set up, it's time to install deployer in our project and configure it.

Once you've got it installed, run ./vendor/bin/dep init and follow the prompts, selecting Laravel as your framework. A deploy.php config file will be generated and placed in the root of your project.

By default, deployer uses GIT for deployments (by SSHing into the server, running git pull and executing your build steps) however since we are running it as part of a CI/CD pipeline (our project has been built and is ready for deployment) we'll use rsync to copy the files directly to the server instead.

Next, we need to set up our hosts. In this example, we'll only use a single host but deployer supports as many as required. Copy the code below into your deploy.php, replacing the existing hosts block. You'll need to customise it your server configuration.

Next, we'll set up the steps that deployer will execute as part of our deployment. These can be customised to your needs, for example you could use the artisan:horizon:terminate task to restart your horizon queues. Copy the block below into your deploy.php, replacing the tasks section.

We'll also need to make a few changes the nginx or apache configuration files on the server.

You want to set your web server root to deploy_path (set in your deploy.php) + /current/public. For example, in our case this is /var/www/current/public.

Now that everything's set up, it's time to test our pipelines!

Commit your .gitlab-ci.yml, deploy.php and your composer json/lock and push! If all goes well, you can head over to the "Pipelines" section in gitlab and watch your build/deployment progress.

If everything went well, you'll have the latest version of your project deployed. Any new commits will be built and deployed without any interruption for you users.

Here's the first deployment of my test repo, and one with a migration.

This post outlines a basic CI/CD pipeline, but there's plenty of improvements and additions that could be made, such as adding staging environments, release notifications, multi server deployment (for load balanced server groups).

I hope you enjoyed this post and it helped you improve your builds & deployments.

If you have any questions, leave a comment below & i'll do my best to respond to them all.